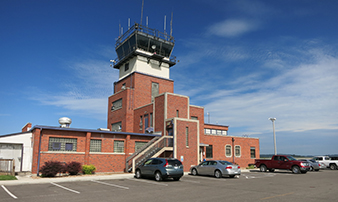 Rosecrans Memorial Airport is a joint civil/military public airport located three miles northwest of the city of St. Joseph in Buchanan County, Missouri. Its main runway stretches 8,061 feet (150 feet wide) in a north-south orientation.The facility stands on a field that was once referred to as the French Bottoms. The airport was named in honor of Sgt. Guy Wallace Rosecrans “and comrades” of the 153rd Aero Squadron, U.S. Army Air Service, 1917-18. Rosecrans was the only St. Joseph airman killed in World War I.At the end of World War II, much of the former U.S. Army Air Forces installation was transferred to the city with the exception of 142 acres for the National Guard. With the establishment of an independent U.S. Air Force in 1947, the military facilities became part of the newly established Air National Guard. Rosecrans Air National Guard Base is currently home to the 139th Airlift Wing, an Air Mobility Command-gained unit of the Missouri Air National Guard, which functions as the host wing for the installation.

Astronomy magazine offers you the most exciting, visually stunning, thorough, and timely coverage of the heavens above. Each monthly issue includes expert science reporting, vivid color photography, complete sky-event coverage, spot-on observing tips, portable am fm radio reviews, and more. All this has made Astronomy the world’s best-selling astronomy magazine. And it comes in an easy-to-understand user-friendly style that’s perfect for astronomers at any level. Explore the magazine’s excellent website here.

Celestron is the number one telescope manufacturer on Earth. In 1970, Tom Johnson, founder of Celestron’s parent company, Valor Electronics, unveiled his landmark product: the Celestron 8, with its standout orange tube, high-end optics, and $1,000 price tag. Armed with the “C8,” thousands of amateur astronomers observed celestial objects previously seen only in professional observatories. The C8 cemented Celestron as the world’s premier telescope brand.With more than 80 employees around the world, Celestron has continued to lead the market for more than 50 years, creating dozens of revolutionary new products. Looking for a telescope? Visit Celestron’s huge and informative website here.

The Astronomical Society of Kansas City is one of the largest and most active groups of fun-loving amateur stargazers in the country. The ASKC has more than 350 members, one of the largest astronomy club telescopes in the Midwest, a private and safe dark-sky observing site, and monthly astronomy programs and stargazing events.The ASKC offers a wide variety of member activities, including, regular monthly meetings on the campus of the University of Missouri in Kansas City featuring interesting speakers; monthly informal stargazing sessions; educational programs that cover many topics; and extensive public outreach programs using the club’s two observatories. ASKC public programs reach more than 5,000 people each year. 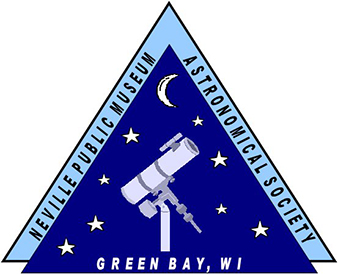 The Neville Public Museum Astronomical Society (NPMAS) is an amateur astronomy club located at Green Bay, Wisconsin. Membership is open to anyone with an interest in astronomy. Meetings are free and open to the public, and have a featured presentation, speaker, or observing session.NPMAS Members have access to Parmentier Observatory on scheduled observing nights. The facility houses a 30-inch classical Cassegrain telescope with a 6-inch Astro Physics refractor, housed in a two story observatory.

The Northeast Florida Astronomical Society (NEFAS) is an organization of amatuer astronomers who live, serve and observe in Northeast Florida. The club operates primarily in Jacksonville and its surrounding communities. Membership currently exceeds 100. As our tagline says, we are a “non-profit organization expanding horizons through education and observation.”The club holds at least three observing sessions per month (weather permitting) and all are open to the public. Groups of members focus on amatuer telescope making and astrophotography. A general meeting (open to the public) occurs once a month at the Florida State College at Jacksonville campus, featuring a speaker or multimedia presentation.

The Astronomy Associates of Lawrence (A.A.L.) is an amateur astronomy club located in Lawrence, Kansas. The club has served Lawrence, the University of Kansas, and nearby communities since 1975. The A.A.L. is open to everyone, all ages, and all skill levels. The club has monthly meetings featuring speakers or presentations and telescope observing sessions throughout the year, from various locations, all of which are open to the public.